Flappy Bird has become one of the most popular mobile games. In our previous posts we mentioned about this insanely popular new game - Flappy Bird. This is the frustrating and very addictive game. It makes you want to throw your phone and smash it to bits! A very unconventional game. Developers at Flappy bird have so far released Flappy Bird for Apple iOS and Android OS.

The makers of Flappy bird are very smart people, they made a game that will want people to keep going and get a high score this game really makes the brain thinks more although the concept sounds easy win you play it gets very crazy and sometimes you might get a high temper. Flap your wings to fly. 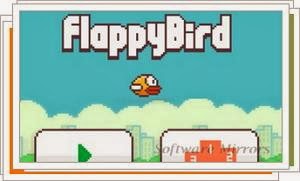