EMCO Malware Destroyer is a tool with which you can fight against the effects of malicious software. This application have an extensive database that contains information about worms, adware, spyware, dialers, computer viruses and any malware.

EMCO Malware Destroyer especially tailored for fast scans and quick removal of any found threats. The installation process is done in a flash, so you'll be face to face with its interface in seconds. Its looks are pretty decent and can be easily customized using the many available styles.

To start with, you should note that it does not provide active protection, heuristic scans or an active shield of some sort. EMCO Malware Destroyer will only search for baddies currently loaded in the memory or running processes that are infected. A word of advice, you should update the malware signature database prior to launching every scan, to make sure no new threats are missed.

The actual process of searching for lurking dangers takes a few seconds, literally. Because the scanner is signature-based, it will only seek for and destroy any viruses that are included in its database with over 10,000 definitions. 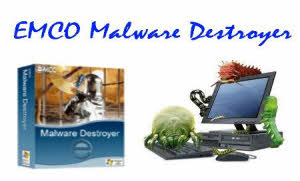 EMCO Malware Destroyer is designed for manual virus checks and the fast scans recommend it, but bear in mind that it is mainly aimed at non-techy users and will only provide an occasional supplemental layer of protection.